TLDR
If you’re working with just optical magnifiers, it’s useful to consider just the relationship between print size and illumination, since you can’t modify the print contrast.

On the previous pages I showed the Visual Volumes (VVs) of a person with normal sight and Alice (who has early-to-moderate AMD), and plotted the position of a newspaper article at three different levels of illumination. But it’s a little bit complicated to always think in 3D, so I’m going to take a moment here to simplify it, and go back to viewing it in just two dimensions.

Ah, but which two dimensions?

Of the classic three dimensions (Bigger, Bolder & Brighter), the two conditions we can easily modify are the Bigger and the Brighter. The contrast of a document is not so easy to modify.

So, instead of taking a vertical slice of the VV to get the person’s Contrast Sensitivity Function at an arbitrary standard level of illumination, it would be more practically useful to take a horizontal slice of the VV to see the relationship between text size and illumination for text of this particular contrast (in this case, the local newspaper). 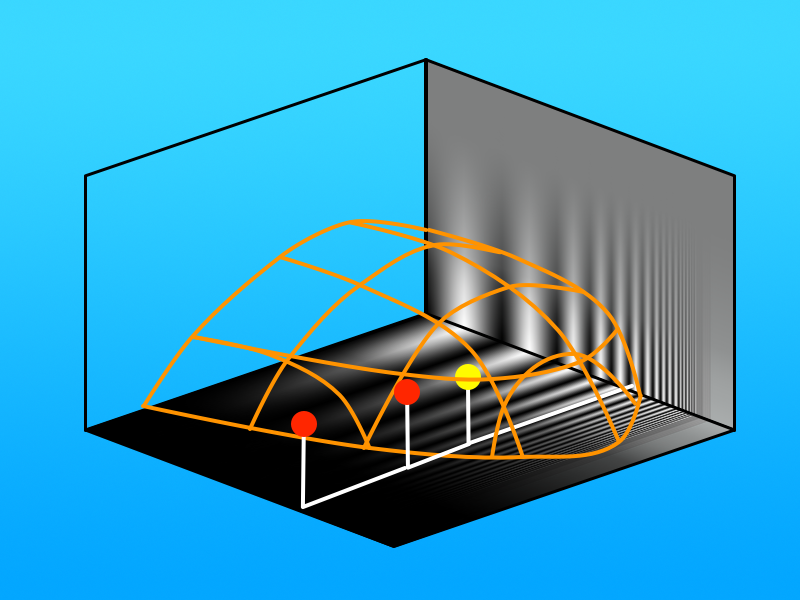 And if we take just the points that relate to one particular contrast level (newspaper), we get a flat plane: 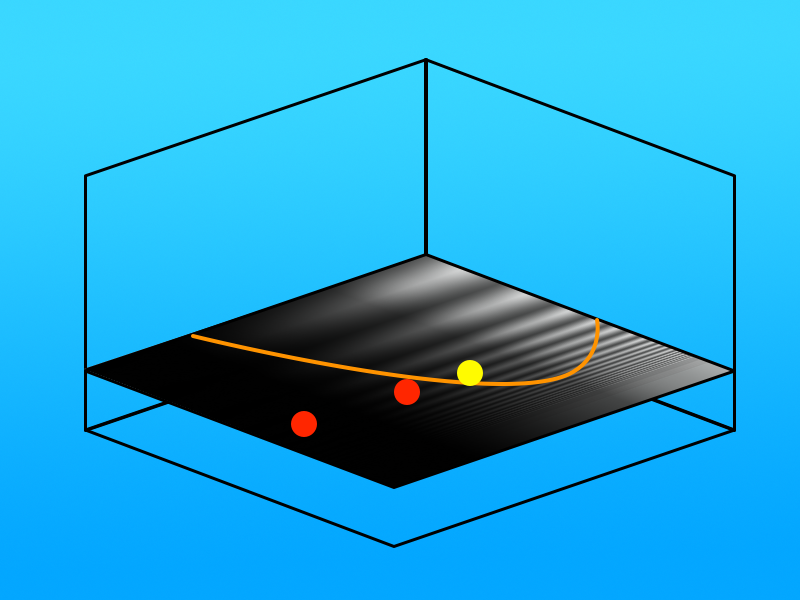 Let’s take a closer look at just that layer. 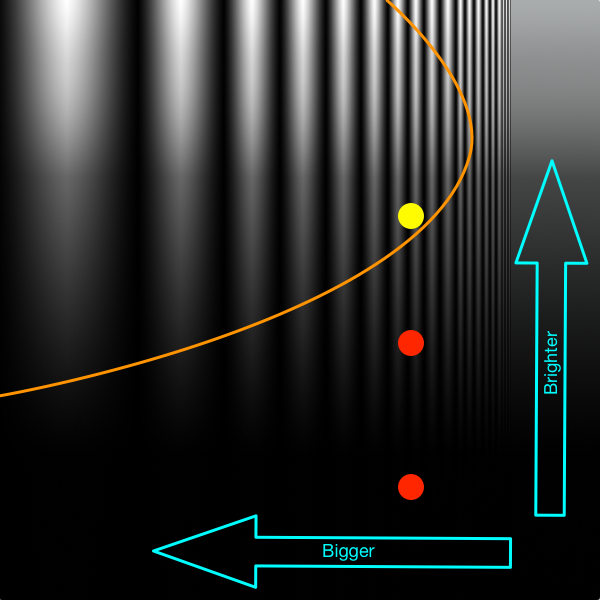 It kind of looks like the CSF flipped upside down, but it shades off into nothingness down the bottom instead of up above, and that nothingness is black, instead of 50% grey (since it’s a luminance gradient, rather than a contrast gradient).

What shall we call this? There may be a proper name, but I’ve never seen this anywhere else. So on the off chance that I’m the first to discover it (if ‘discover’ is the word), I’ll mark its relationship to the Contrast Sensitivity Function by calling it the Brightness Sensitivity Function (BSF).

Aside
Just be thankful I didn’t call it the Crunchy Frog Function or something like that. But seriously, if someone else has already done all this and there’s an accepted name for it, please let me know and I’ll see about updating this site to reflect that.

And (ta-DAA!) there you have it. Unlike the CSF, the BSF is the figure that will give you practical guidance on how best to use both magnification and illumination, our two main tools in low vision rehab, either separately or together. Remember though, this is contrast-specific. This is Alice’s BSF for reading the local newspaper. When Alice is reading a magazine with nice black print on white paper she will have a different BSF, and when looking at a pastel-shades bank statement she’ll have a different one again.

Using the BSF to Understand the Importance of Illumination

So, a patient comes in to you and says “I’m having trouble reading the newspaper.” We need more information. Where does the patient read the newspaper — in the living room? In their bedroom? What sort of lighting do they have in those places? Do they read during the day, or in the evening? Do they have trouble with the newspaper all the time, or do they find that it’s okay when they take it over near a sunny window? 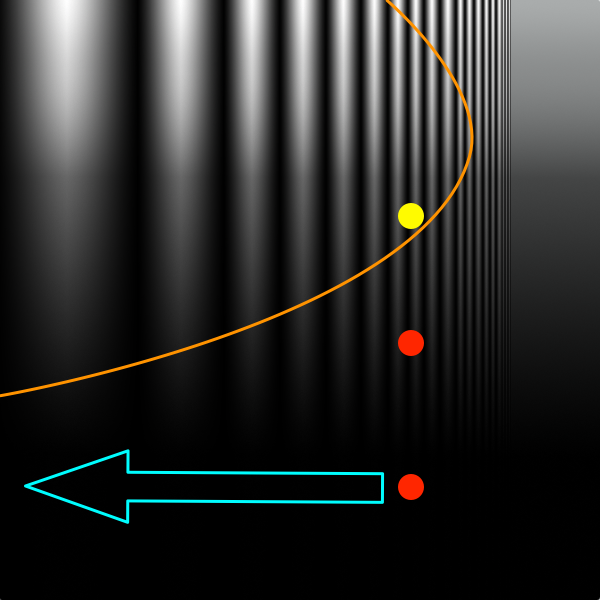 When Alice is in the much dimmer room she can’t read the newspaper article at all, and it’s plain to see that giving her a magnifier will be futile in that situation. You could magnify the print for her until it’s as big as a house and she still wouldn’t be able to read it — it’s just too dim. She needs to turn the light on. 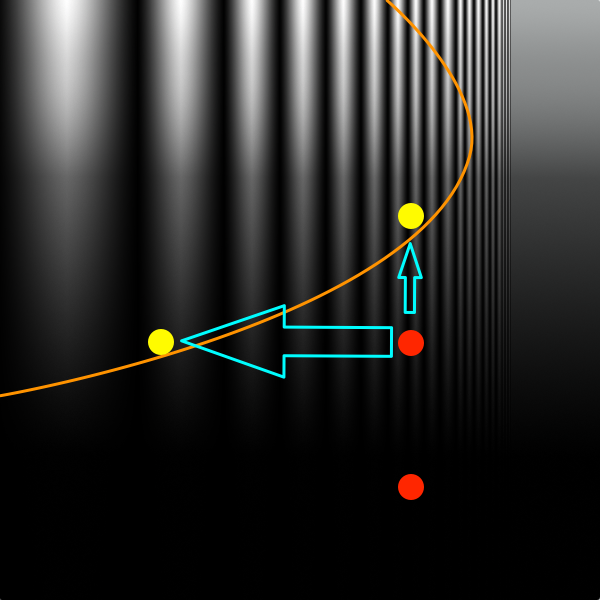 In the not-so-dim room, it would be possible to give Alice a magnifier (or give her a higher reading add) to let her read, but she’d need quite a lot of magnification — certainly a lot more than you’d expect from her (still pretty good) VA. (Remember, never trust a good VA in low vision).

Is that a sensible solution though? Not really. Magnifiers have their own problems , and even with a fair bit of magnification the text is still quite close to the seen/not-seen boundary, so Alice is still not going to be very comfortable. Even though a magnifier could work, the much simpler and more practical action is just to increase the lighting level.

Let’s extend this a bit further. Even though Alice is reading in the well-lit living room, the newspaper is still going to be a struggle for her, as it’s almost on her seen/not-seen boundary. Could we make Alice happier? Could we give her a more enjoyable reading experience? 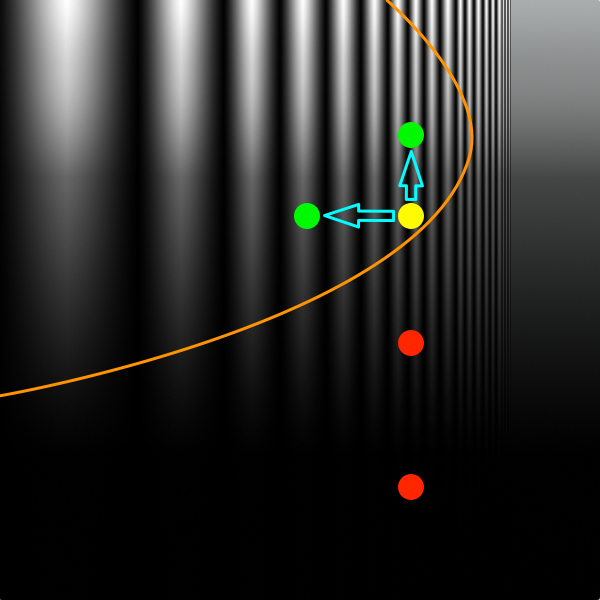 Alice can read the print, but more magnification or more illumination would make it easier

Alice could achieve a more comfortable reading experience by either using a low-powered magnifier or by arranging to read in even better lighting (either adding in some task lighting or moving to an even brighter room). Both of those options shift the Bigger/Brighter point to a position that is further away from the seen/not-seen boundary, deeper within the seen zone.

I can’t emphasise this enough — if you want to give your low vision patients the best and most practical assistance, you need to consider both magnification and illumination options. Very frequently you need to use combinations of magnification and illumination, so it’s critical to understand how they relate to each other in the vision impairment context.

Here’s an illustration of Alice using magnification and illumination together (that is, an illuminated magnifier, or a magnifier lamp, or a higher add in a brighter room, etc): 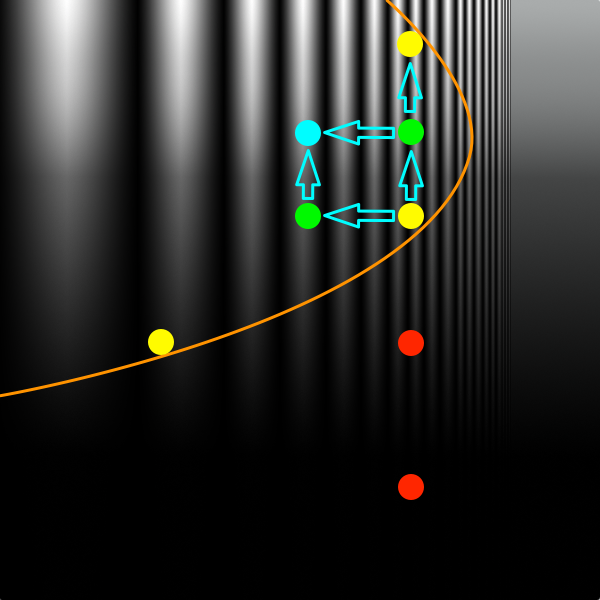 Using magnification and illumination together combines the vectors. Using too much illumination makes it worse due to glare

When Alice uses both magnification and extra lighting, that brings the print to a point (the light blue one) that is even further away from the boundary (that is, it has more reserve), and so her reading should be even more comfortable.

I’ve also shown the situation where Alice adds in too much light, and the text position has shifted closer to the top boundary of the BSF. That represents a situation where the light has become so bright that it is causing Alice discomfort glare.

There’s a strong underlying tension with illumination, especially for patients who have media opacities. On the one hand, we know that the macula of patients with glaucoma, diabetic retinopathy and (most especially) AMD functions markedly better with a much higher level of illumination. On the other hand, too much illumination can be uncomfortable for the non-macular retina, and media opacities can make that worse.

There can be a good case for removing cataracts in patients even with advanced macular disease, purely to allow higher illumination without discomfort. That takes a lot of pre-op counselling though, with their ophthalmologist as well as the patient. Neither should expect a significant improvement in visual acuity, but they can expect an improvement in overall visual function, and they should be able to more effectively use their low vision aids.

Another good trick when you have a low vision patient who is limited by glare is to use electronic magnification, in which you can reverse the print to white text on a black background. The contrast and illumination of the white part of the document can be high, while still keeping the overall amount of light entering the eye to a minimum.

Top Tip
Overall though, I find even patients who are quite glare sensitive do surprisingly well with task lighting. That’s because the lamp or magnifier is only putting that high level of illumination on a small area, the area that the macula is viewing, so that the rest of the retina is only exposed to normal ambient illumination.